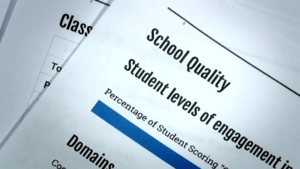 More than half the schools in Lee County School District (LCSD) demonstrated great gains on the S.C. School Report Card this year. Student performance at three of its five schools increased, one of which moved up two levels.

Schools are graded on student performance in the following five levels of the Overall Ratings relative to the profile of the S.C. Graduate: Excellent – substantially exceeds; Good – exceeds; Average – meets; Below Average – is in jeopardy of not meeting; and Unsatisfactory –fails to meet.

Two schools in LCSD are rated Average, two Below Average and one as Unsatisfactory this year.

“We are excited about our growth and realize we have room for more,” says Dr. Wanda Andrews, superintendent of LCSD. “The two schools which were rated as Unsatisfactory last year are the ones with the greatest gains, even meeting the states standards this year. We know that our efforts to improve have not been in vain. We will continue to work with our students in an effective manner. I commend our students, parents, teachers and our leadership team for all their efforts and hard work.”

Lee Central Middle School (LCMS) led the way in gains, going from an overall rating of Unsatisfactory last year to one of Average this year. Dennis Elementary School (DES) improved by 14 points moving them from an overall rating of Unsatisfactory to Below Average. If Lee Central High School (LCHS) continues next year with the six point move they realized this year, they will push out of their Below Average status to that of Average.

LCMS’s scores increased by 11 percent on SC Ready’s English/Language Arts. LCMS’s Principal Patrice Holmes says the quality of the instruction made the difference. There was a substantial increase among seventh graders in English/Language Arts and among sixth graders in mathematics. Performance on the science and social studies portions of SCPASS rose. In social studies, the increase was by nearly 12 percent. The student engagement indicator of the percent of teachers, students and parents satisfied with LCMS’s environment point to a culture shift. There was an increase of more than 27 percent in that area. The classroom environment appears to have been one factor in shifting the culture with teacher vacancies being filled sooner, a lower student-teacher ratio and an increase in the number of teachers with advanced degrees. These improvements defy research pertaining to “middle-school madness,” which purports that middle school is where academic achievement/improvement drastically declines.

DES Principal Ricky White is in his second year as principal so for there to be any level of achievement is cause to celebrate, he says. Their strength, according to the School Report Card has been among fourth graders in the area of ELA. Like LCMS, DES also experienced a shift in culture. Teachers, students and parents expressed satisfaction with the school’s environment. So much so, that the School Report Card details fewer chronic absences among students and a substantial increase in the percent of teachers continuing their contracts.

Though Lower Lee Elementary School’s (LLE) rating dropped from one of Good to Average, their efforts to move students from does not meet expectations to approaching expectations is significant. They also saw significant gains in social studies. West Lee Elementary School’s (WLE) status change from Average to Unsatisfactory can be largely attributed to a decline in scores in the areas of math and science, while English/Language Arts scores increased by more than 6 percent.

"The results from our state testing are measures and indicators of school success but do not fully reflect the learning which takes place each day in our schools," says Andrews. "We invite you to visit our district and school websites to fully appreciate the educational value."